Flames of the Forsaken: Dark Age's Prometheus 1/3 Assembly and Base Building

I am working on a really cool new project, Prometheus from Dark Age's Forsaken faction. It's a painting commission with a really cool twist, I get to paint him up however I want, but I have to do a step by step so my client can follow along at home. He's is going to paint another of St Isaac's Forsaken heavies, Ajax.

Both models are big robots with a lot of texture. They're cast in resin, which is great and both have bipedal man-like shapes. The box art for Prometheus is pretty sweet: 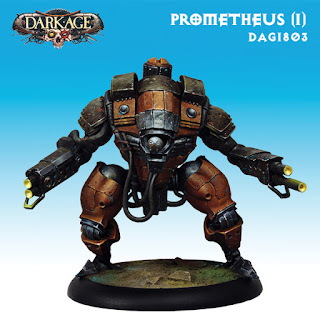 The box art paint job has great colors and really shows off the texture that the figure is sculpted with. I have painted a couple of other Dark Age figures and the are really cool, but they were both cast mostly in metal and the texture was a little bit of a surprise. In metal it's hard to tell what sculpted what is just a rough patch. With resin, it's clear that the texture is sculpted in.

The next step is cleaning up all the little pieces and getting them ready for assembly. All the usual tools work just fine on resin. Prometheus didn't need much work at all. If you like, this can be a fun time to add to the sculpted texture. A scratch or a bullet hole will also work to hide any mistakes you might make with an overzealous file or poorly aimed snip, just don't get carried away.

I guess I could have fixed the gap in the picture above by warming the resin and trying to stretch the tube over, or maybe gluing the joint and then sculpting the rest of the tube with putty, but I had a much better idea: I completely removed the too-short tube. I could have just stopped there, and if this was more of a table top style project I would have, but instead I drilled some holes where the tube looked like it was supposed to go and I used some old wire from the garage to replace it.

I know from experience that electrical wire takes paint nicely, it's easy to bend and cut, and you can fray it a little like I did in the picture to make it look old and worn out. I am very happy how it looks on Prometheus. I always keep some in the bitz box.

After the legs were assembled I added the body. Then the last thing to glue on was the arms. The arms are connected with a ball and socket type joint so you can pose them how you like, but before I posed the arms I wanted to work on the base a little bit so I would know exactly how the figure would stand before I glued on his arms. This probably wouldn't be a big concern for a table top project, but for a display piece or anything that you want to look good, the pose is key.

I cannot tell you how many times I have struggled to put a painted mini onto a base. It's the worst. It's so much easier to put the mini on the base before you paint it. I know it's not always possible but at the very least you should have the basic shape of the base figured out with some holes drilled for your figure to go in before you paint.

The first step for our base was to put some pins in his feet and drill corresponding holes in the base. The pins will reinforce the joint connecting this guy to his base. I prefer brass wire for pinning, It's plenty strong, but still soft enough to easily cut and bend, it comes in rolls from the hardware store and it takes paint and glue nicely, it also comes in a wire gauge so it's really easy to match to drill bit diameter so you can get a nice tight fit. Really you can pin with what ever you want. Paper clips seem to be the default for a lot of people, probably because they are so widely available, but you could use plastic rod or even toothpicks. If you go with paper clips it doesn't hurt to rough them up a little so they will take the glue better.

You can see in the picture that Prometheus has some seriously delicate ankles. Its never good to point out your own mistakes, but here I feel it is warranted, if you look closely at the pin in his right side foot you can see that I have missed the foot and drilled into the space that is sort of between the two toe-like stabilizers on foot. I did this because the first attempt to drill a hole for the pin was botched, I caught it before I did any damage, but it didn't leave any room for another hole. So I tried to hide the pin as best I could and it ended up right there. It's going to be really hard to see and later it will be easy to hide with dirt or whatever we use for the base. I did manage to get both pins all the way through those those lady-like ankles and up into the thicker material of the lower leg. I think this was pretty important because this model is going to see some game time and that ankle just didn't look strong enough on it's own.

For the base I wanted to have something that looked industrial, but like I mentioned before this guy is going to see some game time so I couldn't add to the overall the height of the miniature. I am always collecting things that might look cool on a  base so I had a few options.

I have a bunch of gears and cogs for basing because I think they are awesome. The MDF cog in the picture above looked suitably beefy for this base, but it had some a couple of drawbacks: It wasn't quite the right shape to just plop down on the base and because it's made out of wood it has some wood grain texture on it that I thought might show through my paint job.

So I broke out the Instant Mold. Instant Mold is soft plastic that is about the consistency of a glue stick for a glue gun. You put it in hot water for a few minutes and it gets soft like putty. Once it's soft you can mold it around shapes that you want to copy, like our cog, then once it cools off you peel it or even cut it off.. Instant Mold is ideal for this kind of stuff and I highly recommend picking some up. you can reuse it over and over again and it does a decent job of capturing details. You can do the same thing with green stuff too, but the Instant Mold stays much softer. You can find it here: https://www.coolminiornot.com/shop/review/product/list/id/6964/category/610/

Once I had taken an impression of the cog, I pressed green stuff into it and I had nicely shaped piece for my base. You can see that the instant mold did not copy the wood grain texture, perfect! We'll do the rest of the base after we paint the figure.

Now that I had a good idea of what my plan was for the base and how this figure was going to stand, I could put the arms on and finish assembly. I mentioned already that the arms connect with the 'torso' with a ball and socket joint. This is correct but that joint is very shallow so the arms would definitely need to be pinned. The arms have big shoulder pads that go on last so pinning them is going to be really easy. First I glue the arm how I like it, then once the glue has set, I drill all the way through the arm and into the torso. The shoulder pad will hide my pin once they it is in place. You still need to dry fit everything first. Make sure the shoulder pads will have enough room.

And that is assembly all done. My next post will be all about painting this lovely resin model. Here is Prometheus completely assembled with a spritz of primer: 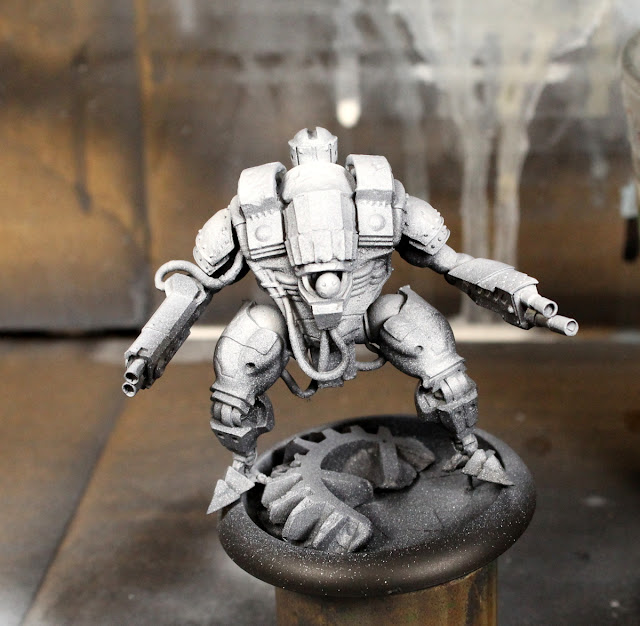