Magnets are cool. There is no doubt about it. Being able to swap and use all the weapons that come with a kit is really fun, but also, for our big kits, having some parts magnetized is a great option for storing and moving these monsters around. Here is a little step-by-step of how I magnetized Denghra. 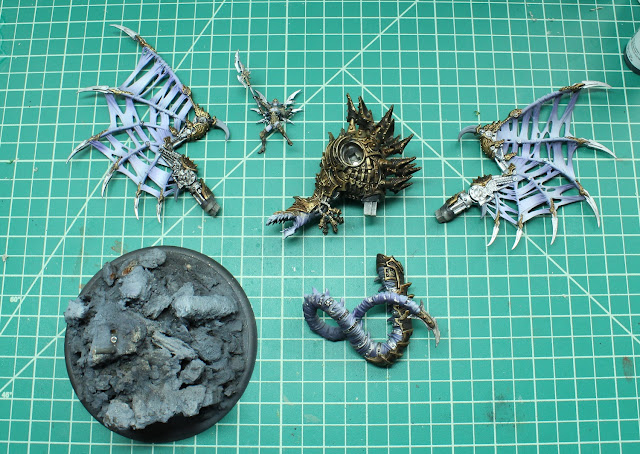 In the WIP picture above you can see all of the joints that I have magnetized.  Ole, who is getting this piece is a serious gamer and he wants to take it down to the game store to show off to his friends.
The joint between the tail and the thorax will actually end up getting glued.

I did the wings first. There is a shoulder type piece that goes between the wing and the thorax. I glued this to the wing first. The softer plastic this model is made of takes super glue (CA glue) really well and the joints were quite snug right out of the box so no pinning was needed. 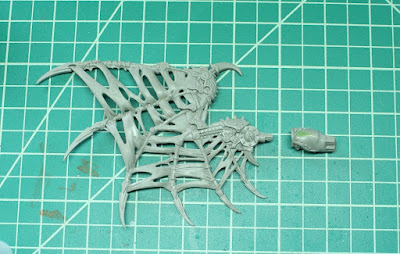 You can see that the shoulder piece above also has a much bigger plug that will go into the socket on the thorax. That is where one of our magnets will go. Here is a picture of where I placed the magnets. 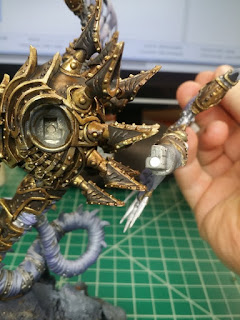 I was tempted to cut the plug off and glue it into the socket before I added the magnets, but I am glad I did not. The magnets have really incredible clasping force but do next to nothing to stop rotation on their long axis. The last thing I wanted was droopy wings.

I used 1/8" diameter magnets from www.magcraft.com. I am sure any will do, but the Magcraft guys have a nice website and they shipped super fast the magnets also come in a child proof jar which is nice if you have curious kid-o's around.

You will need a drill bit the same diameter as your magnet to make the hole to place your magnet in. Now before you go wailing on your model with your 1/8" drill bit and your dremel, take a minute to double check that everything fits together how you want it. You'll be drilling two holes and they need to line up when you are done.

When you are ready to drill the holes drill a pilot hole first. A pilot hole is a small hole that will guide your larger drill bit when you are ready. Start with a small diameter bit and then increase the your drill bit diameter to make a progressively larger hole.This helps for a couple of reasons: It's easier to place the smaller diameter drill bit right where you want it and progressively increasing the size of the hole puts a lot less stress on your model than just drilling one big hole to start. I used three stages to make my 1/8" holes. First, a 22 gauge bit, then a 1/16" bit and finally the 1/8" drill bit. It seems like it's more work, but it actually makes the drilling much easier, not to mention any headaches it might save you.

The thorax is hollow so I filled it with a big blob of green stuff. I wanted something solid for my magnets to sit in. If you are following along at home make sure you leave enough room for the joint with the neck piece. 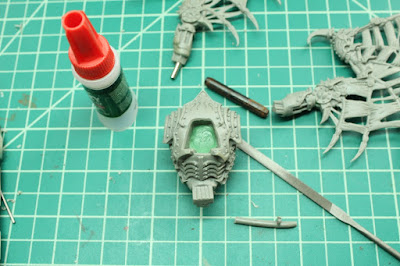 Once the green stuff is cured you can follow the same steps to drill your hole for the other magnet.

Before you place your second magnet, take a quiet moment to reflect on the nature of magnetism in general and the polarity of your magnets in particular. Magnets will stick to ferrous metal any which way, but they will only stick to each other in one direction. DON'T SCREW IT UP! Digging one of the magnets out of your model is no fun. If you had to do it I would guess drilling a hole to the back of it and pushing the magnet out would be the easiest way.

I had to clean up the wing joints quite a bit so that the plug would fit in the socket easily. I didn't want Ole to have to wrestle with the joint every time he wanted to take it apart. at least not too much.

Once I got these done I decided to magnetize Deneghra as well. It was pretty easy. Here are some highlights: 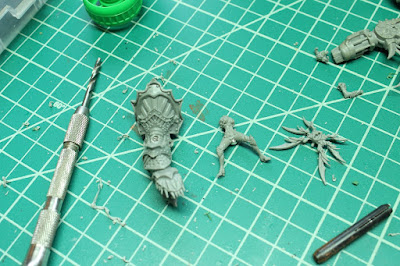 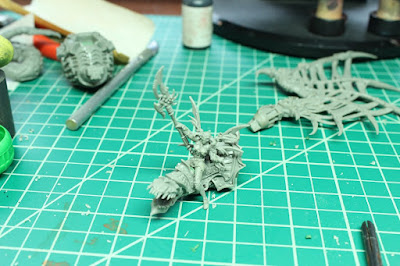 I think she is ready for payback now :) 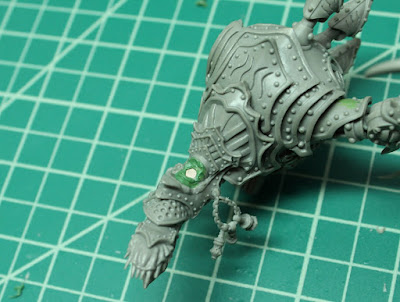 I fixed up her saddle a bit to hide the magnets when she is sitting. It kind of needed it anyways as the fit wasn't that great to begin with.

I also decided to magnetize the whole thing to it's base. My first step was to get her posed nicely on the base. Posing big models like this can be pretty tough. There is a lot going on and if get something wrong it all the awesome paint in the world won't fix it.

I was not very happy with how the factory had her set up for the base. She looks good on the box art, but when I tried to line mine up she looked off balance. I also saw some examples that people had posted on the web and some of them looked a little unbalanced. No big deal if you are just gaming, but I really want mine to look good, so I decided to remove the basing tab she comes with and start fresh.

If you rock the model forward just a bit, her center of gravity comes much closer to under her saddle. I think this makes the wyrm look a lot more dynamic. It can make Deneghra herself look like she is titled too far forward, but I fixed that when I green stuffed her saddle. Here is my adjusted pose: 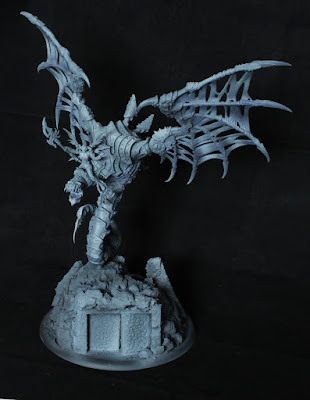 For this pose to work with magnets I needed some sort of a pin. The magnets I had weren't strong enough on their own to hold Deneghra solidly upright. So, I needed an 1/8" diameter steel rod for my pin and to be one side of a magnetic joint. I found a nail that was just the right diameter and cut it to length. Drilling the corresponding hole in Denghra was a little tough. The hole needed to be at a sort of tangential angle to the bottom of her tail and judging the right angle with the serpentine shape of the sculpture proved to be difficult. Everything else had gone very smoothly so, of course, I screwed up. However, all was not lost! It just meant I would have to correct my angle on the base side of joint. 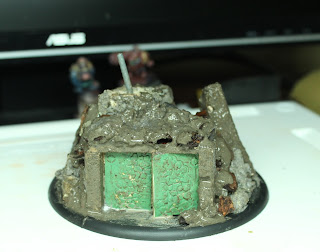 Seems level to me.

So the pin is at a funny angle but I think the model looks spot on. I added a magnet to my hole in the tail to stick to the pin, and a second set of magnets to the tail and the base to keep the model from rotating on the pin. In the picture there is another relatively minor screw-up on the base. Can you tell what it is?