New project time! It's the Skitarri box from Games Workshop. I really like these models. A friend plays a Techpriest sniper in our Dark Heresy game and couple of years ago I added a sniper rifle to the old Techpreist figure. When these came out I new it was only a matter of time before they would be on my desk. 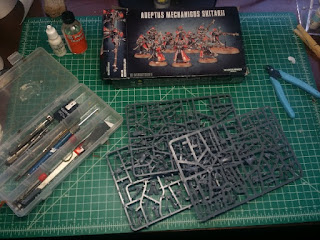 Time to snip the Skit'

The kit is pretty fun. Lot's of different poses for a GW box and tons of extra goodies.
I haven't assembled plastic minis for a while and I forgot how much mold line scraping there is. There wasn't any slipping or other casting issues but it was a few hours to get them all put together. 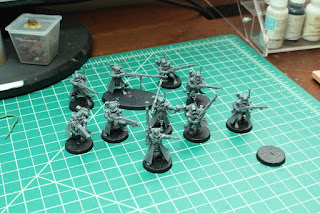 I decided to go with Rangers instead of Vanguard. I just like the look better. The Ranger Alpha only has a Galvanic rifle like the troopers which seems like a pretty standard load out for these guys. Since they are all long range one more long range shot is probably more effective than a close range attack. I think it looks cool too. I did build two guys with the optional Arc Rifle and Plasma Caliver. They are probably going to end up on a different squad. I gave them the bare heads that come in the box so I could switch them from Vanguard to Ranger if I want.

I did a small bit of conversion work to give the Alpha his pose with his rifle in the air and one ranger taking a knee. For the alpha I just had to swap the front half of the rifle and on the ranger I had to do some really simple sculpting to make his coat look like it's folded under him. 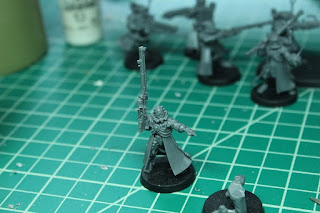 The back half of the vanguard radium carbine and the ranger galvanic rifle are the same so it was easy steal the other up pointing arm. I had to cut it carefully and then used Plastruct plastic weld to glue it up. I could have done it with super glue too but then I would have had to pin it and probably do some green stuff. The plastic cement softens the plastic enough that with a good joint there is no gap. 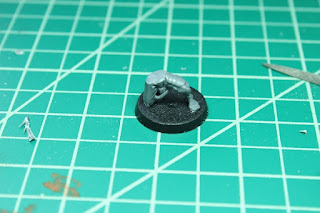 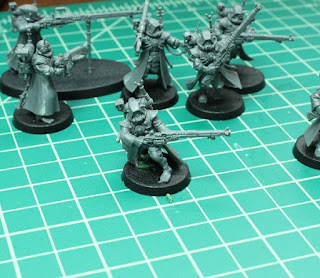 The coat hides the leg so i didn't need to green stuff that. I like how his rifle looks like it is resting on his leg now. 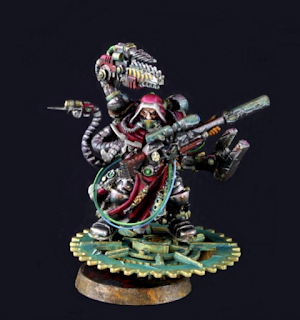 You can see more of him in my CMON gallery, http://www.coolminiornot.com/335788