My new Joan of Arc is done. Hooray! 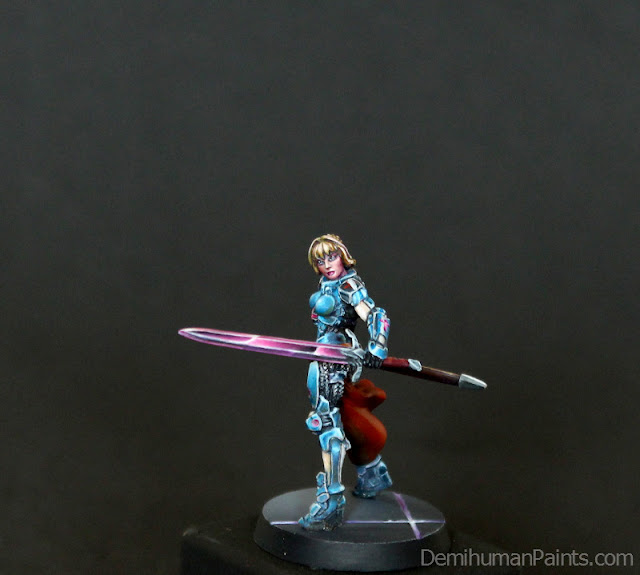 She could probably use a bunch of touch ups, and if I ever decide to enter her in a comp or something I will probably do some more work on her. The tough thing about painting her was that I started painting her one way, following the Angel Giraldez Masterclass book and when I was about 80% done with her I did a 3 day workshop with Alfonso "Banshee" Giraldes.
You can read about it here:  http://www.demihumanpaints.com/2015/09/alfonso-banshee-giraldez-workshop-review.html

When I got back from the workshop I wanted to try out some of the new techniques I had learned. Well, I ended up pretty much completely repainting her. 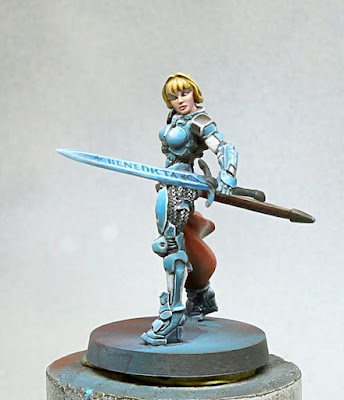 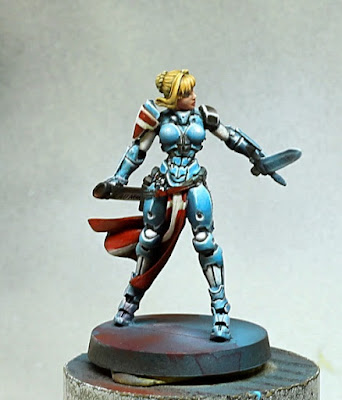 While painting her the second time I did a lot of experimenting. Experimentation is great and fun, but it can make for some very slow and frustrating painting. The sword in particular was really hard to figure out. I wanted the sword to look really dynamic and stand out. I got so frustrated trying different things that I filled in the "Benedicta" that is sculpted on the sword so i wouldn't have to paint it anymore.

I tried to do a super realistic chrome effect, but it proved to be much harder then I had thought. Here is my last attempt at the chrome: 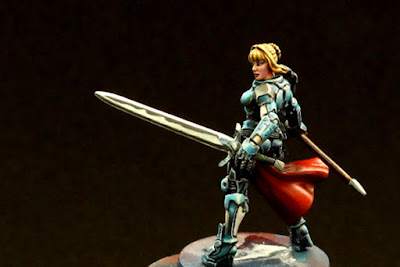 Uh, why is there a wavy black line on her sword?

It looked cool from a couple of angles. It also looked bad from some angles. I thought about trying to adjust the dark and light parts to look like SENMM, but when I did that it didn't make any sense alongside the shiny blue armor. Tried to add gradients going up and down teh blade to do classic NMM but that looked too medieval,

So after scrapping that I decided that I would have to paint the sword in a way that didn't make any sense in terms of realism. I arbitrarily added some horizon lines. I tried to make them radiate out from her eye and just started laying in with some blends. Why pink? The original Joan Of Arc has a pink sword. So why not? 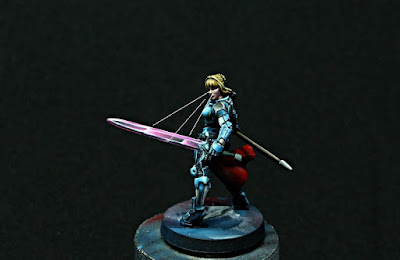 Guess what, it came out pretty good! Does it make sense in terms of a light source? Maybe there are multiple pink lights shining at the sword? Maybe it's a magic sword? Lasers? I don't know and I don't really care. It looked cool so I moved on. This whole time I had been looking at Banshee's Ironman bust for inspiration. You can see it here: http://www.puttyandpaint.com/projects/3094

The iron man bust has some pretty strangely placed highlights and shadows if you think about it in terms of how an object reflect lights, but the all work together to show you the bust in three dimensions and they build a ton of contrast. This really clicked with the workshop.

So I tried to repeat what I did on the sword on the armo. The armor turned out to be a lot easier. Putting a big white line down her arm actually made sense because the arm is a cylinder. Slap a black line next to it and you get more contrast and an effect that looks like a shiny paint job in the sun. 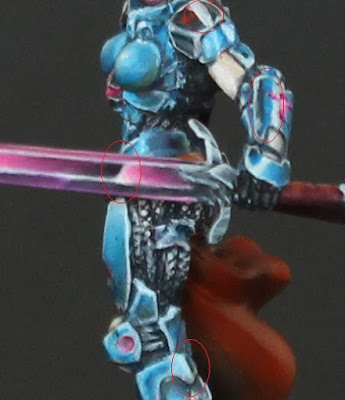 The circles show some of the places with really high contrast. Notice they aren't blended. Just big stripes of dark and light right next each other. 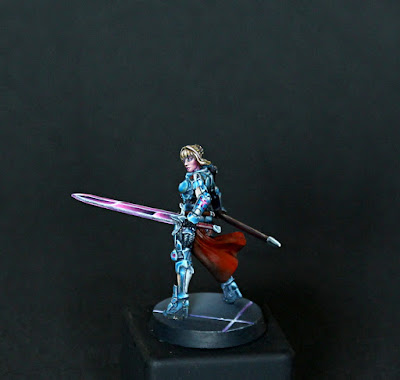 Trying to get the lines on the base to work for me. 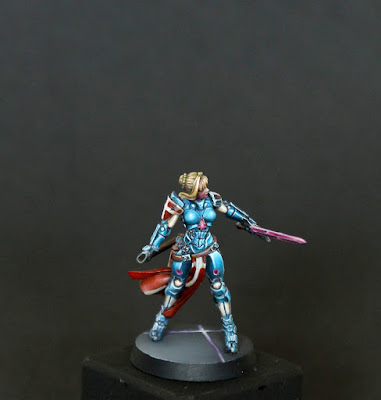 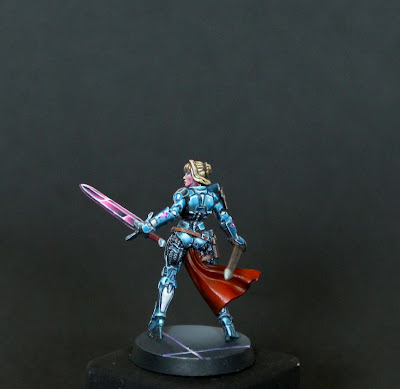 The cape actually needs some matte varnish on it. 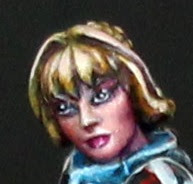